You must forgive me for the lack of updates. It's finals week this week, and despite my efforts to clear up my week, I've only just hours ago finished up my last paper, ensuring for at least 3 days of fun. Any how, I'll return next week (as I'll be moving out of the 109) and give you some much needed absurdity. In the mean time, how sad is this? Click the pic for a detailed view. 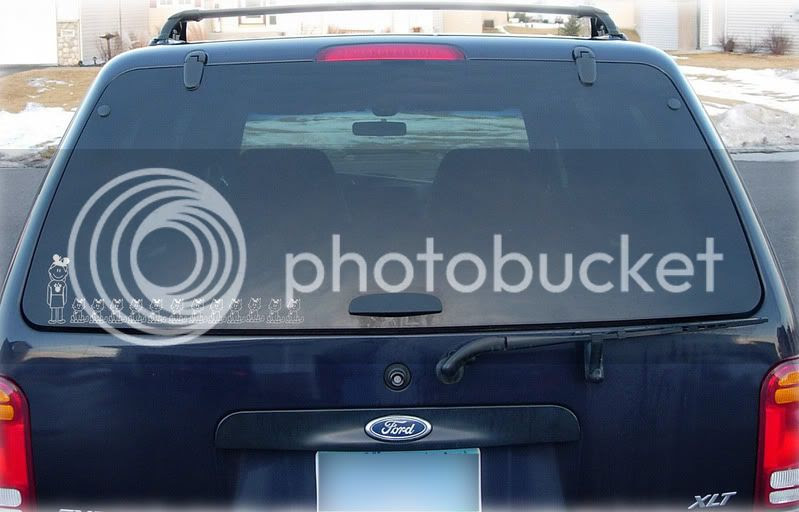 Edit: How timely. Over at Stuff White People Like, they too have posted about the wonder of bumper stickers. Take a look, it's worth the read.
Posted by Aaron at 3:45 AM No comments:

Do you fold or crumple? Though it seems a matter of preference in regards to cleaning your posterior, it is in fact much more than just that. To fold or crumple is not a question you should take lightly, for in this outwardly simple question lies many crucial factors.

The Wipe:
It seems logical that the fold would serve as a more efficient method in cleaning. If you spilled some...chocolate syrup on your counter, would you crumple the paper towel before wiping it down? Or would you try and use as much surface space as possible, meaning leaving it "open," rather than bunched in no particular method. I dare say we would all leave it open. But while considering the surface space, one must also take into consideration the thickness and how that effects one's choice.
Winner: Fold

Ply:
It seems here that, at first glance, the crumple method would provide the user with the most distance between their fingers and the...things which need to be wiped. 6 squares can be crumpled to give you anywhere between 1/2 an inch to maybe an inch depending on the method of crumpling. But when you think about the distance, after careful deliberation one must decide if distance out weighs the need to "get the most" out of a roll. If 6 squares can give you, say 3/4", but 3 squares can give you enough thickness to get the job done, do you use double the amount for the extra distance? With that question in mind one must consider the ply count.
Winner: I say a tie due to outside circumstances, but if you must have a winner I'd say crumple by a nose.

Comfort:
Ply doesn't only determine "hand safety," but it also determines the comfort level. At school it's 1 ply (supposedly it's 2 but if you count that as 2 then you must be referring to rice paper) At my apartment it's 2, quilted. Now at school with a stiff, non-quilted single ply, when crumpled you maybe faced with some rather ridged and sharp edges. However when folded, one is given a more comfortable feel. If you have a 2 ply, quilted I would assume that both have about roughly (no pun intended) the same comfort level.
Winner: Fold, as it maintains comfort despite the change in ply

Disposal:
Though comfort plays a major roll there is one final category that we'll go into, and that's disposal. You maybe saying to yourself at this point, don't they both dissolve in the same place? Yes, however I feel as though there are other factors to take into account. The toilet in my apartment is a bit slow on the flush. This is could have two different causes. 1) The water entering the bowl is being blocked, thus not allowing the content to be flushed out quickly enough. 2) There is a blockage in the pipe, causing the water to exit slower than in a non-obstructed pipe. Now my question is this. Which would prevent clogging better. A hasty conclusion might declare the victor, folding due to the smaller size (given the height of a crumple). Though this maybe true I thought about the ability to create a blockage that would require a snake to break through. One would think that crumple would cause a blockage easier. This maybe true, however I think given the structure, with the gaps within the crumples, I would think air bubbles would form making the overall structure of a crumple more flimsy. Folding however allows for the wall (if stood up vertically) to be rather thick, 2 ply, quilted, and 3 squares deep, thus giving it 6 plies. Now multiply by how many folded "bunches" used each visit, and multiply by trips per week and you'll be able to figure out the thickness of a blockage.
Winner: I think it's a draw, as crumpling has the ability to clog easier as the diameter of a crumple is greater than that of a fold. But the fold can create a thicker blockage.

The Winner is...
Fold, by 3 to 2. Not only is the fold more comfortable, it also is an efficient cleaner, and potentially has a lower chance of causing a clog. Though this is very official and by all accounts fold is obviously the better choice, I'd love to hear your thoughts on the matter. So start commenting!
Posted by Aaron at 12:00 AM 4 comments: